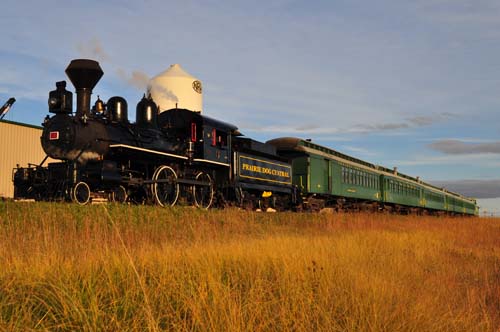 One of our founding members, the late Gordon Younger, researched the files and wrote the following several years ago:

I cannot find anything in writing from old notes which start on February 18, 1967.

From the beginning, the name Claydon Cannonball and Prairie Dog Special were the media buzz words. It was (former City of Winnipeg councilor) Leonard Claydon’s idea to use No. 3 and Coach 103 for circle tours of the City during the Pan American Games and Canada’s Centennial, the Pan Am Games being held in August 1967. There were some complicating matters, though. The pieces of equipment were owned by the City of Winnipeg Hydro; they were stored on the Greater Winnipeg Water District Railway yard in St. Boniface; and the Metropolitan Corporation of Greater Winnipeg operated the GWWD. So, here we had two pieces of equipment owned by the City — but stored on Metro property. Politically, it was a battlefield. The City and Metro were at odds with one another.

John LePage (the Society’s first President) and I wanted to think of a name which would get away from the “politically incorrect” Claydon Cannonball. I remember thinking that the CPR used a beaver in their emblems and that the CNR had used a maple leaf as their logo. We wanted to use something with the word “Prairie” in it, such as Prairie Rose, Prairie Crocus (the provincial flower) — as but two examples.
When I visited the Regina Natural History Museum in the late 1960’s, there was (and probably still is) a diorama of the various parts of the province of Saskatchewan. In the southwestern corner of the province, which is very dry and arid, there is the only area in Canada where the Black-Tailed Prairie Dog can be found in its natural habitat. The location, if you have a map, is around Val Marie, in the Frenchman River Valley.

I recall thinking, “This is the answer to our name!” I didn’t really think that the Gopher Special sounded good, so we called it the Prairie Dog Central. Gophers are very common to Manitoba and there are true prairie dogs at the Assiniboine Park Zoo. Even after all these years, though, some people call the train the Prairie Dog Special.